Posted on April 5, 2012 by afrugalspinster

At work I parked my van in the parking garage. I have considered the shopping center where I work to be a safe place. It is in an upscale neighborhood. The garage where I parked is well lit and has security cameras. It is shared by all the businesses in the complex. People are coming and going at all times of day and night because some of the businesses are opened 24 hours. I have never worried about leaving valuables in my vehicle. That all changed today. 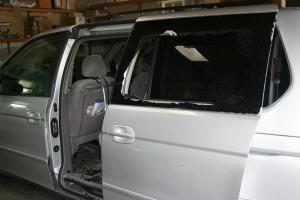 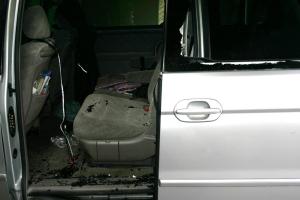 I arrived at work at 5 AM. When a co-worker arriving for her 9 AM shift arrived, she came in and said I think someone broke into your van. Sure enough the drivers side slider window had been shattered.

In my car were among other things, my GPS, my $350 binoculars, my purse with credit cards and cash. Nothing had been disturbed.

The police officer who came to investigate dusted for prints but told me in “smash & grabs” the thief usually use a tool to break the window then reach in take what they want and never touch the car. She told me they would check the security cameras, but I never heard back from her on that.

The opening sales clerks told me that it was fine when she saw it at 7AM. So between 7 and 9 someone broke the window but was frightened away before they could take anything.

” His eye is on the sparrow and I know he watches me”, and my car.