Posted on September 21, 2012 by afrugalspinster

Purposely Frugal’s post today was “7 things about me”. To my amazement at the bottom of her post she nominated me to do a “7 things” post too. Not knowing much about how blogging stuff works I don’t know how to “link” (is that the right term?) to the blogs that I would nominate. I’m not sure there are 7 bloggers that I’d like to learn more about. I am deliberate in not revealing personal information on my blog. I WANT to be anonymous. Therefore I’m satisfied with the info that is offered by other bloggers and feel I would be prying to ask for more.

Nonetheless I’m interrupting Zucchini Week to tell you 7 things about myself. 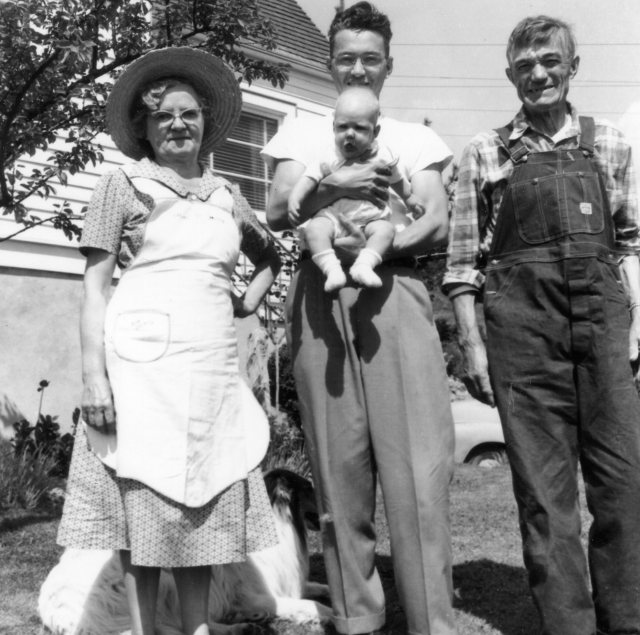 I was born in 1952. I am the oldest of five children, two boys, two girls (one sibling died before birth). My sister and I are 5 years apart but look so much alike that we are frequently asked, ”Are you ladies twins?”,  to which I reply, “she is, but I’m not”, then they are really confused. At which point we explain that she has a twin brother, and NO, THEY ARE NOT identical. Which is usually their next question. I guess the general population doesn’t understand that, fraternal twins are two separate eggs that are fertilized by two separate sperm. Identical twins develop from one zygote that splits and forms two embryos. Therefore identical twins will always be the same sex.Twins run in my family. There are five sets in three generations. I have often teased that the reason I never married is that it was a forgone conclusion that I too would have twins.

I learned to drive on my father’s  ’57 Ford pick-up (three on the tree). He said “if you can drive the truck, you can drive anything.”

I am a nature lover, especially birds. Just this week I saw life bird #297, Lewis’ Woodpecker. That means I have seen 297 species of birds in my birdwatching career. I hope to get to 300 before the end of 2012.

Growing up I lived in the same house for 18 years. Since then I have lived in about a dozen apartments or rental houses, (roommates all married and moved out). In 1994 I purchased a 3-bedroom rambler. I have no plans to move soon.

Until 2001 I had never traveled any further than the three west coast states and British Colombia Canada. I have since visited Alaska, Montana and Florida. A globe trotter I am not.

I don’t read very well. I bluffed my way through school.

I became a professional baker/decorator by accident. A former roommate worked as a waitress. She came home one day saying how difficult her day had been because the baker didn’t show up for work on time. She continued her tale of woe, but I was fixated on the fact that there was a staff baker. I have loved cooking and especially baking since I was old enough to help my mother in the kitchen. So being paid to bake sounded like a dream job to me. At the time I was working at a fabric store (I also enjoy sewing). Some time later she told me the baking position was open, and asked if I wanted to apply for it. I did, they hired me, one thing led to another and I ended up as a cake decorator.

So there you have it seven things about me.

4 Responses to 7 things about me