Explorers, fur trappers, and traders found and began to use the wildlife trails that Indians followed across the continent’s interior. Those same trails provided a link to the West, opening the route for Oregon-bound emigrants.

Eager to expand the growing nation, the United States’ government encouraged emigrants to move toward the Oregon Country. Settlements in the West would help America’s claim to the land—and American farmers were eager to help their country reach all its potential. Back in the 1840s, Britain and America both claimed the Oregon Country.

Things really got rolling in 1843 when one group (nearly a thousand persons) set off in covered wagons. They were on their way to the Oregon Country. Today we call it the Great Migration of 1843.

Founded in 1827 near where the Missouri River flows into the Mississippi, the town of Independence grew rapidly as a trading post. By the 1840’s, it was the most popular “jumping off” point for pioneers to stock their wagons with supplies before heading out to Oregon or California. 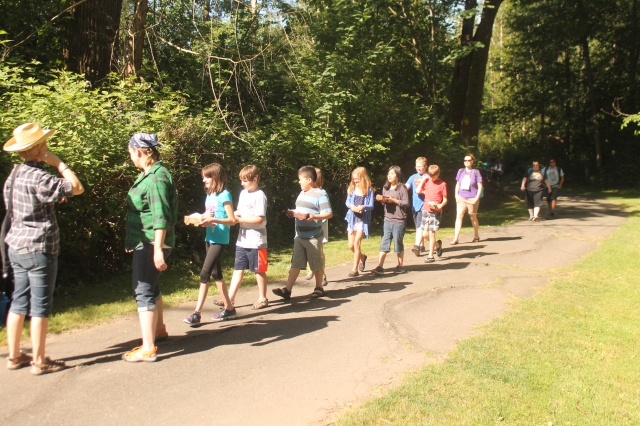 After a teacher gave final instructions, each wagon train prepared to hit the trail. A parent volunteer was stationed at Independence to act as a store keeper who could sell last minute supplies to the pioneers before they departed.