Posted on August 3, 2015 by afrugalspinster

The Oregon Trail through what is now the state of Nebraska was generally considered the easiest stretch of the journey. The land is flat, water was readily available and there was plenty of food for the livestock. Rising from the North Platte Valley were 400 foot rock formations that served as way markers to the pioneers.

Courthouse, Jail, Chimney Rocks and Scott’s Bluff. At each stop they were quizzed about that landmark. 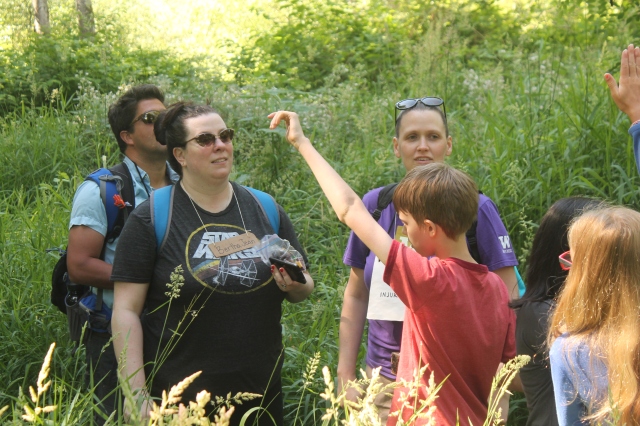 Starting west in the early spring, emigrants along the Oregon Trail hoped to reach Independence Rock by July 4th, Independence Day. If they had not arrived by then, they knew they would be in danger of experiencing potentially crippling weather and limited grazing opportunities for their horses and oxen before reaching their ultimate destination.

Named for a fur trader’s Fourth of July celebration in 1830, this huge rock became one of the most famous of all Oregon Trail landmarks. The giant piece of granite is 1,900 feet long, 700 feet wide, and 128 feet high . The landmark was a favorite resting place for travelers along the trail. Called the “Great Register of the Desert”, more than 5,000 names of early emigrant were carved on this boulder.

Our “Rock” was a large sheet of cardboard. As the trail guides brought the pioneers past the rock each traveler was able to “engrave” their name on the rock. 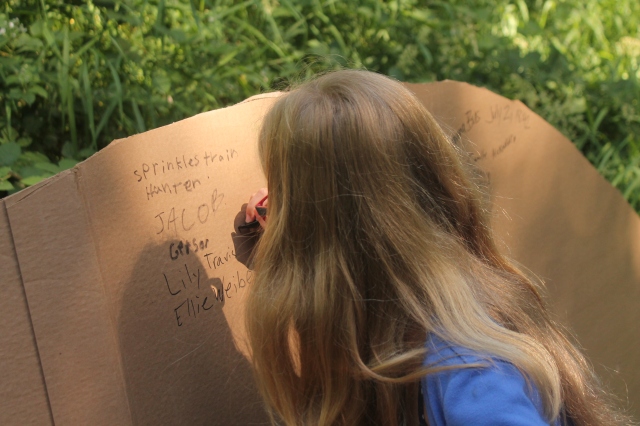 I made Independence Rock from a large cardboard box that I got by dumpster diving in the recycle dumpster behind a local appliance Store.