Posted on October 8, 2016 by afrugalspinster

Last year some time I decided I wanted to make my own tomato sauce. As a single person household I don’t need a lot at one time so I planned to preserve it in 1/2 pint jars.

This spring I planted three San Marzano plants, with the expectation of a BUMPER crop.

The plants grew well and have lots of tomatoes

but you have to look deep inside to find the one and only ripe tomato.

Recently I was at the grocery store when I spotted the produce man removing spoiled vegetables. He told me they were going in the garbage. I offered to buy  all the tomatoes if he would mark them down. I  ended up paying 50/ pound and I only had to throw away 3 moldy tomatoes. Some of the packages were unsalable only because the tomatoes were squished. 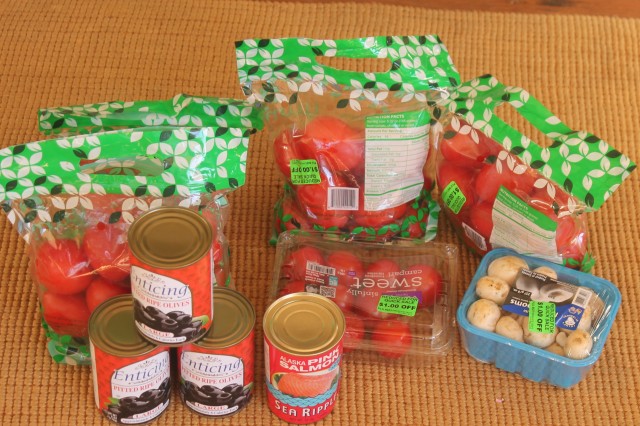 I had all the other ingredients on hand, including the jars, lids and rings which were all thrifted.

I’m still hoping for garden tomatoes but realistically I doubt they will ripen before our first frost which typically append in late October.

Next year I’ll get my plants in the ground earlier.