Posted on March 5, 2017 by afrugalspinster

I’ve been under the weather for several days so I’ve done more reading than usual.

I pulled a book from my own collection. One I purchased at a thrift store of course.

I love reading Christian biographies. My greatest heroes of the faith  are those who followed God’s call to go into all the world and preach the gospel.* 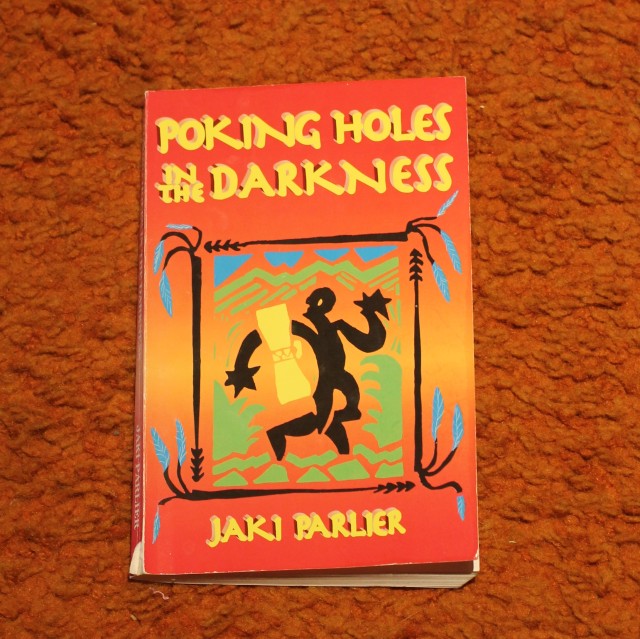 Poking Holes in the Darkness is an autobiography about how Judy and Jim Parlier moved to Papua New Guinea to live among a stone aged tribe.

When they arrived in their village no one would say Judy’s name although they quickly learned to call her husband Jim. It was months before she learned that the word jud-ee had an undesirable meaning in the Managalasi language. Eventually a woman explained what her name meant and gave her a new name Jaki.

Little by little as they lived with the Managalasi people the light of the gospel poked holes in the spiritual darkness the people lived in. Before leaving her home in New Jersey, Judy was confronted by someone who said, “those people have their own religion, they’re happy as they are– why do you want to change them? The truth is that the people’s lives were ruled by fear. Everything in their culture revolved around appeasing spirits.

A break though came when Judy, who had been mocking their belief in ancestral spirits attaching them, found herself under satanic assault when she broke a taboo. She overcame the enemy in the name of Jesus. From then on  instead of trying to convince the people there were no spirits, they began to teach them that there is power to over come Satan in Jesus.

The Parliers spent twenty years living in the jungle. They made a Managalasi alphabet, taught the natives to read and translated the New Testament into Managalasi. When other villages wanted to learn to read and learn about God too, Jim equipped native teachers to evangelize their own people.