Not the usual Show & Tell

Today I’m going to only feature two cakes and tell you their back story.

First up is this artist pallet. 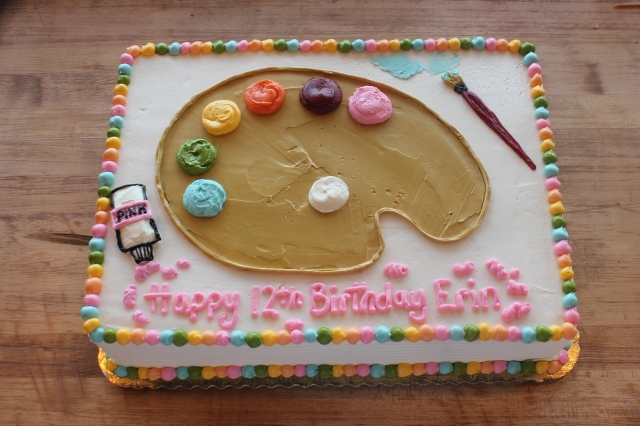 On Saturday May 7th (the day before Mother’s Day) we had an order for a cake with an artist pallet. Additionally the customer was very specific about the colors and order of the colors on the DOT BORDER. By the time Rosie mixed colors and then individually piping dot after dot, the border easily took her far longer to do than the pallet and it was the main decoration.

When we arrived at work Sunday morning there were several cakes that had not been picked up from the day before. Since all our cakes are custom orders this is quite unusual, but we thought that the customers had ordered Mother a cake for Saturday just so they wouldn’t have to make a stop at the bakery on Sunday when the whole family would be getting together. That explained the Mother’s Day cakes, but the pallet cake was for a 12 year old’s birthday, and it was still in the cooler too. It turned out that the wrong date had been written down on the order form. Erin’s 12th birthday party is actually on May 21st. OOPS! Now we had a 1/2 sheet cake all dressed up with nowhere to go.

It just so happened that an employee ordered a 1/4 sheet cake for a Mother’s Day gathering so she “took one for the team”, cancelled her order and took the half sheet instead. Skye reworded the inscription to say “Mothers Paint beauty into Life”. All’s well that ends well.

Next was this BOOX cake. 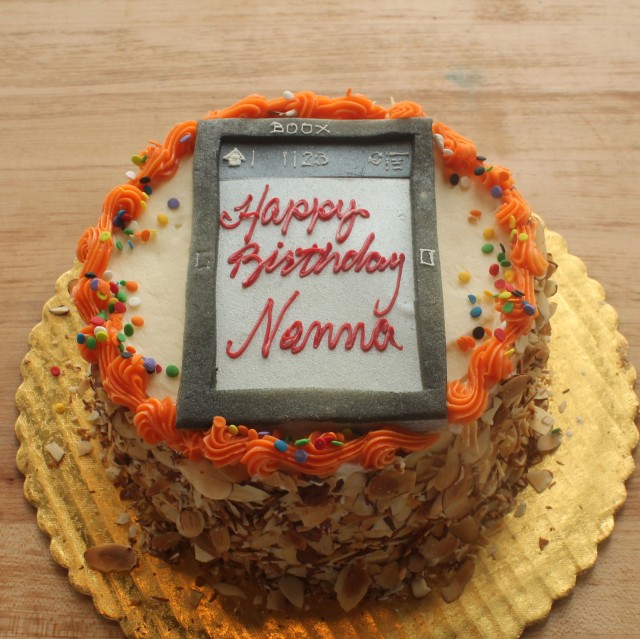 The customer ordered a 6″ carrot cake with this specific e-reader and Happy Birthday Nanna written across the screen. I put quite a bit of thought into how I would execute this design on such a small cake. When I was finished I was pleasantly surprised with the result. Mid-morning one of the front end staff brought the cake to me and said “It’s supposed to say Happy Mother’s Day can you change it?”. It’s true, I often go on auto pilot and write Happy Birthday when I should be writing something else on the cake but this time the order did say Happy Birthday. I had written in red frosting and to remove the writing would surely leave a smudge. I thought over my options for making the repair while I continued to work on the cake I was doing when I was interrupted. I certainly hoped there was a way to  fix the carrot cake without having to make a whole new BOOX. Just then the sales person called something back to the decorating table but three of the four of us didn’t catch what she said. I DID know she was referring to  my re-do so I asked around the table did you catch what she said?  Janis answered, No,  Rosie, No, when I got to Skye she repeated the front end employee’s “Don’t change the cake” command.

I still don’t know what the actual mix up was, but I expect that someone with a similar name came to pick up their Mother’s Day cake and was presented with Nanna’s BOOX. They then said, “BUT it’s supposed to say Happy Mother’s Day”. This seems like a strange scenario though because BOOX aren’t the usual decoration of choice for Mother unless you are giving Mom a BOOX. So the receiving customer should have recognized that the 6″ carrot cake with a BOOX wasn’t their cake.  Like I said before, all’s well that ends well. Nanna got her BOOX cake and the other customer got the right Mother’s Day cake.

Do things go wrong at your place of work too?

2 Responses to Not the usual Show & Tell